Building as active elements of the Energy System

The proposed energy concept considers the use of buildings equipped with battery storage as active elements of the energy distribution network. The pilot project, launched by FENIX in June 2016 is tasked with testing the possibilities and ways of using and controlling such a building. The tested structure is a new administrative centre in Jesenik, built to the 2020 standard. 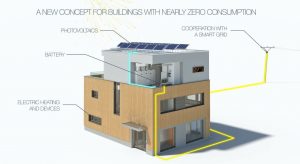 What is the aim of the project?

The aim is to test the cooperation of a building equipped with home batteries with a so-called “Smart” distribution network (Smart grid) and to prove the advantageousness of this solution for all participating parties (producer/distributor/consumer). Another aim is to create the conditions for the appearance of a new tariff under which batteries will be charged from the network during periods where there is a surplus of electricity (for example from renewable energy) under advantageous conditions. Then in peak periods, the batteries will allow partial or even fully autonomous operation of the building.

What type of building is the tested concept designed for?

The knowledge and experience gained during the pilot operation of the administrative center can be applied to any type of building, including residential buildings, basically without any limitations.

How will it work in practice?

The end user will obtain a battery storage system for his building (including electronic control devices) and will agree on a special tariff with their energy supplier. The exact nature of subsequent building operation in terms of energy management – i.e. whether the batteries will be charged from the grid or his own photovoltaic power system, or whether electricity will be supplied for the user’s need or back to the grid – will be controlled by the power supply network operator. In return for allowing the supplier to make use of the capacity of their battery storage system, the home owner will be able to purchase energy at a very advantageous price.

Will it be a good investment?

The implementation of a new tariff for building with home batteries is expected in the years 2018-2020. With regards to current world-wide investments into the technologies involved, a drop of up to 50% in the cost of batteries can be expected in comparison with 2016 prices. In this case there will be a real return on investment.

Will it be necessary to create a special control system?

No, a suitable system already exists: remote control via ripple control signals. Even now, energy grid operators can switch off appliances in buildings which are equipped with a ripple control signal receiver –typically direct-heating appliances, storage heaters and water heaters. This system can also be used to control battery charging.

How does this concept differ from the so-called island power systems?

The term “island power system” describes buildings which are independent from energy suppliers. In order that electricity production and consumption is bala 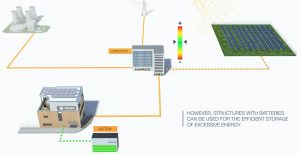 nced in such a building not only during the day (24h) but also throughout all four seasons of the year, a large capacity storage system (batteries) and a powerful source of renewable energy are needed. This is an expensive solution, which is over-dimensioned and underused during most of the year. With regard to population density and the existing distribution network, island systems don’t make sense versus the advantageous solution of a network of shared home batteries.

Why battery storage systems are necessary?

The basic problem of our current energy system is not a lack of energy, but rather a surplus of it. This is particularly true in case of energy production from renewable resources such as photovoltaic or wind power stations, which basically cannot be controlled. However, with regards to the environment, it is necessary to produce every day more energy from renewable sources of energy. It is therefore necessary to find a mean to store energy in its universal form (i.e. electrical energy), effectively and efficiently. Battery storage could the solution we are looking for !

BUILDINGS AS ACTIVE ELEMENTS OF THE ENERGY SYSTEM. Match video