Perspectives for 2017: Ceilhit and Fenix Group leading the change 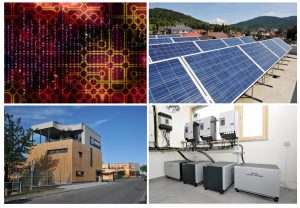 When comes the end of the year, it is time to make balance of the year and above all to look at perspectives for the coming year.

Six month ago, we announced the start of operation of the new office center of the group, a near zero energy building designed below the concept of active element in the smart grid system. At that time, we also analyzed the long term perspectives and challenges in the energy policy for the European Union.

What is the current situation six months later and what has been the latest news in the sector?

During year 2015, the global average concentration of CO2 in the atmosphere broke the 400 ppm milestone over one continuous year. In 2016, carbon dioxide level keeps increasing with no rest, reminding the necessity to undertake urgent actions.

As a response to this urgency, one year ago in December, the world adopted the Paris Climate Change Agreement. During this year 2016, the agreement entered into force thanks to the ratification of more than 55 parts (countries representing more than 55% of the total gas emissions).

However, on the 30th of November, the European commission presented a new proposal for a European Directive on the promotion of the use renewable energy which is not following this trend. It has been clearly rejected by the sector as it represents a clear step backwards in respect with previous directive. Without entering in many details, the new proposal sets a binding target of 27% for the share of renewable energy in the union for 2030, clearly insufficient to comply with the target on gas emission reduction. As we explained in the June post, reaching 2030-2050 targets requires a considerable increase in the effort. However, the target set by this proposal of only a 7% increase during next decade is far less ambitious than the one from previous directive in which the share of renewable energy passed from 6 to 20% in the 2006-2020 period.

On the other hand, fortunately, the industry is still being the real engine of the change with important technological advances in this sector as well as the contribution of many different companies. From leading companies as Tesla and Solarcity from emblematic Elon Musk, that presented at the end of October new photovoltaic tiles with the exact external aspect of traditional tiles, to small companies or start-up that innovate and develop new products.

Among the latest, we are pleased to announce the new creation of AERS (Advanced Energy Storage Systems) co-founded and financed by Fenix Group. AERS will develop from 2017, modular universal control systems designed for all type of buildings, with intelligent energy flow control management, providing users the opportunity to optimize their photovoltaic installation within a smart grid environment.

With this new step forward, Fenix group confirms its engagement in creating the conditions for the smoothest and widest possible development of the 2020 concept (near zero energy building as active element of the energy system).

We will continue to provide information and share with you the latest advances during 2017.